What's the best way to normalize duration to account for speaker and speaking rate differences?

If segmental durations are normally distributed, z-score normalization has some nice properties.  It's easy to estimate from a relatively small set of data.  Since the z-score normalization parameters are simply MLE univariate Gaussian parameters fit to the feature (here duration) you can adapt these parameters using maximum a posteriori adaptation to a new speaker, or new utterance -- if there is reason to believe that the speaking rate might have changed. 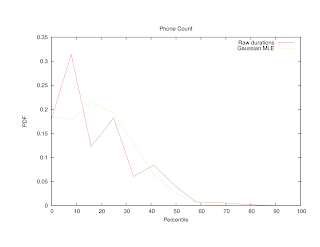 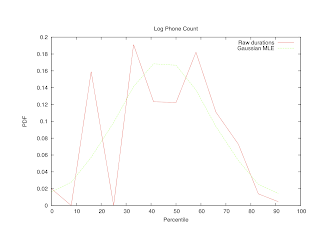 So I took a look at a speaker (f2) from the Boston University Radio News Corpus, and looked at the distributions of word, syllable, vowel and phone durations to see if any look more or less Gaussian. 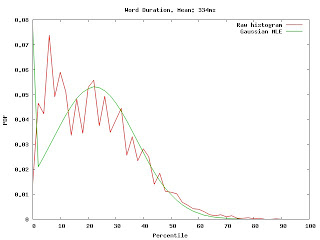 The distribution of word durations is decidedly non-Gaussian.  We can see evidence of the bimodality that is likely coming from the abundance of monosyllabic words in the data (~59% of words in this material).  Also, comparing the histogram of phone counts and word durations, the relationship is fairly clear. 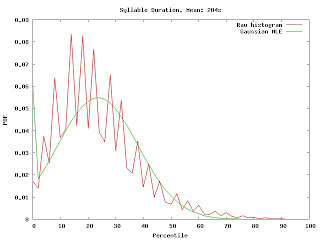 Syllable durations don't look too bad.  There's a bit of skew to the right, this model is overestimating longer durations, but this isn't terrible.    There is a strange spikiness to the distribution, but I blame this more on an interaction between the resolution of the duration information (in units of 10ms) and the histogram than an underlying phenomenon.  If someone were to take a look at this data, and decide to go ahead and use z-score normalization on syllable durations, it wouldn't strike me as a terrible way to go. 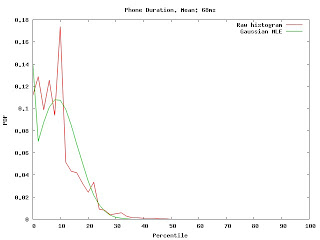 There has been a good amount of discussion (and some writing, cf. C. Wightman, et al. "Segmental durations in the vicinity of prosodic phrase boundaries."  JASA, 1992) about the inherent duration of phones, and how phone identity is an important conditional variable when examining (and normalizing) phone duration.  I haven't reexamined that here, but suffice to say, the distribution of phone durations isn't well modeled by a Gaussian or likely any other simple parameterized distribution.   In all likelihood phone identity is an important factor to consider here, but are all phone ids equally important or can we just look at vowel vs. consonant or other articulatory clusterings -- frontness, openness, fricatives, etc.? I'll have to come back to that. 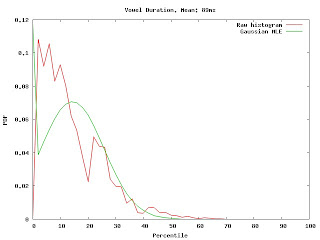 But...if we look closer at the distribution of vowel durations, while this isn't all that Gaussian, it looks like a pretty decent fit to a half-normal distribution.  I don't see any obvious multimodality which would suggest a major effect of another conditional variable on this either phone identity or lexical stress, but it's possible that the dip at around the 20th percentile is evidence of this.  Or it could just be noise.
To properly use a half-normal distribution, you would have to discount the probability mass at zero.  This has the advantage that vowel onsets and offsets are much easier to detect than consonant boundaries, syllable boundaries or word boundaries.

Interspeech was in Makuhari, Japan last week.  Makuhari is about 40 minutes from Tokyo, and I'd say totally worth the commute.  The conference center was large and clean, and (after the first day) had functional wireless, but Makuhari offers a lot less than Tokyo does.

Interspeech is probably the speech conference with the broadest scope and largest draw.  This makes it a great place to learn what is going on in the field.

One of the things that was most striking about the work at Interspeech 2010 was the lack of a Hot Topic.  Acoustic modeling for automatic speech recognition is a mainstay of any speech conference, that was there in spades.   There was some nice work on prosody analysis.  Recognition of age, affect and gender were highlighted in the INTERSPEECH 2010 Paralinguistics Challenge, but outside the special session focussing on this, there wasn't an exceptional amount of work on these questions.  Despite the lack of a new major theme to emerge this year, there was some very high quality, interesting work.

Here is some of the work that I found particularly compelling.
Interspeech 2011 is in Florence, and I can't wait -- now I've just got to get banging on some papers for it.
Posted by Unknown at 12:22 PM No comments: